In the meantime here's a picture from Super League Triathlon in Jersey. 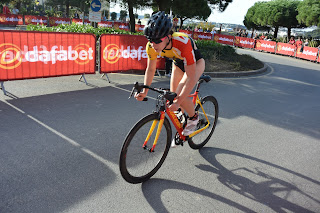 There and back (to Faro eh) - a long ride in Gotland

Two days after triathlon competition some of the team headed out on a long ride to the northern Gotland island of Faro.

The route on Relive which is a seriously cool app!

Checkout my other videos on YouTube
Posted by Track352 at 1:00 PM No comments:

Back to Herm - time to rejuvenate and burn your furniture

Just spent the weekend helping out my friend Caroline with her Herm Yoga retreat.  This year's theme was wellbeing and ageing gracefully and in addition to yoga we enjoyed some talks and practicals from a physical therapist whose ethos stems from the fundamental point that modern living is in conflict with our evolution as a biped.  Sitting in chairs, he claims, is literally killing us as we didn't evolve to sit on chairs and peer into screens.  We evolved walking, running, squatting, crawling, sitting and laying on the ground.  Burn your furniture, move more, move randomly, challenge yourself.

The talk was really interesting, the audience was captivated, the physical session of practicing exaggerated and different movement patterns to reawaken the primary functions of our body was great fun too.  Glen works with Philip Beach and his website provides some more insight.

Added to that the menu over the weekend had been especially selected to emphasis the selections of foods that promote well being and ageing gracefully.

We were blessed with a gorgeous Saturday - sunny and warm.  The day began with meditation followed by a flow yoga class.  After breakfast and a little relaxation another runner and I took a group out for a little run and afterwards on the high tide we went for a swim.  After lunch I led another group for a walk around the island hunting for some geocache's and soon after it was time for the Budukon class.

The sunset was quite special, I managed to catch it with a time lapse on my GoPro.

And also some general views of the island and what we did between the sessions.

Something worth working for

I'm finding it really hard to stop being a competitive athlete despite not getting any younger, yet here I am starting my 52nd year and I'm already clear on what my goal races are for 2017 and how I'm going to approach the season and planning my training.  It makes it a lot easier being surrounded by a great bunch of motivated (and younger) athletes who make me regard age as just a number.

Seeing the success of the triathletes I coach reaching their goals this year has been immensely satisfying whilst also it further challenges me to then work out how to progress them for next season and a new set of goals.  End of season is time for review, celebration, rejuvenation and goal setting for the coming year.

I thought Island Games Jersey 2015 was going to be my last Island Games as a competitor, I achieved my goal 1 of being in the scoring team and getting a silver team medal, and goal 2 of a top 10 finish. So having gone with the flow and signed up for the club trip to IronMan Vichy 70.3 for 2016, I found I raced really strongly at Olympic Distance and really enjoyed the training, so much so that I couldn't turn down the chance to go to a second Island Games in Gotland in 2017.  So the planning and training cycle starts again.  When you have a clear goal that motivates you everything falls into place and it becomes something really worth working for.

But first a bit of celebration.

Magda : IronMan debut 11hrs 47 at Vichy, France
In little more than 3 years in the sport Magda has experienced some highs and lows. After an initial rapid rise from novice to winning Guernsey's GraniteMan half iron distance race she struggled with sustaining the momentum of the progress she had achieved and experienced the lows of injury and illness which meant 2015 did not live up to her high expectations.  When she started training with me last year we set about attaining consistency and perhaps most importantly learning that sometimes taking it easy is the better option.  She decided 2016 was going to be the year of the IronMan and she trusted me to coach her through the process. That she trusted me was great as I'd not coached anyone to Iron distance before, so I felt really under the spotlight - I could not let her down!  Preparation was good but not perfect - the usual hiccups of a slight injury or bit of illness got in the way, but all of the key sessions were completed, the overall volume was good and with it came confidence and self belief.   Magda is not a quitter - she will never readily give up and armed with a reserve of resilience it saw her through the race and she exceeded her expectations.  We'd expected a bit of walk / run strategy for the marathon but she was able to maintain running all the way - except through the aid stations where walking was planned to keep the fueling going.

All in all it was a perfectly executed race with lots of smiles, and shows that Magda is naturally well suited to being a long distance athlete.  Bravo.   2017 Goal - go faster in Copenhagen ! 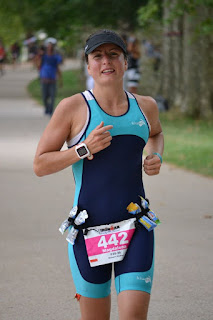 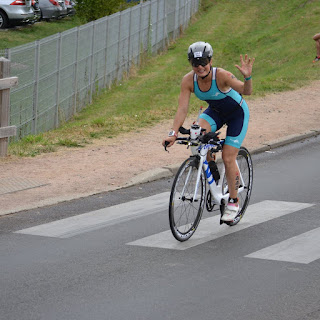 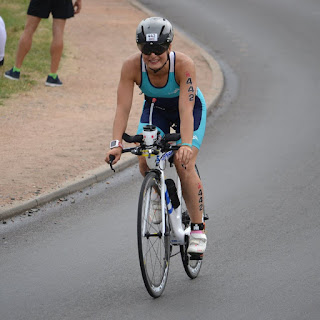 Amy : ITU World Triathlon Championships, Mexico, Olympic Distance 11th place 35-39yrs
Like Magda, Amy has only been in triathlon a few years so to go from novice to making the GB Age Group Team at first attempt and then to finish first Brit at the Worlds was an outstanding achievement.  Amy came to me in at the start of winter 15/16 and had clear goals of what she wanted to do so we planned a periodised programme which would have 'twin peaks' in order to qualify for the team and then to race the Worlds.

As well has having these ambitious goals Amy was juggling training in massage therapy involving time away on training courses, working and supporting her partner's fitness business and its programme of mass participation events.    So rather than setting a rigid training plan I laid out the general pattern of training and identified the key sessions which Amy would then slot into her schedule as she could.  Great progress came in running through the winter including some great times at 10miles and 5k and bike and swim performance were strengthened too.  What always impresses me about Amy is the way she just absorbs the things I say, the challenging sessions and then just gets on with it.  So cool and chilled!

I try not to get too hung up about race times in triathlon and I suggest the same to my athletes as race distances are always subject to variation and from event to event and conditions on the day affect times for races held on the same course. That said when the improvement is in the order of 10 minutes you know it was not just down to a fast course or being lucky on the day.

Whilst a bit disappointed with her run split in the 36c heat and 95% humidity of Mexico she executed the race really well and whilst others were passing out from the effects of the heat she delivered a rock solid performance and has a great platform to build on. Smitten by the buzz of the World's Amy wants to improve on the placing in Rotterdam in 2017 as well as looking at improving her individual performance at the Island Games in Gotland.  With a solid base established over the last couple of years I think there's plenty more to come.


Age Group triathlon write up on Fry Fitness
Posted by Track352 at 2:02 PM No comments: 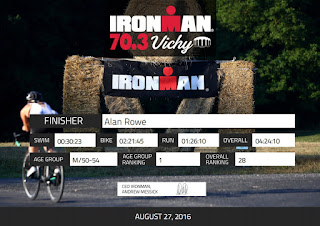 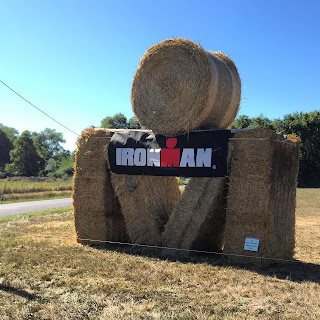 Had a great weekend in Herm helping out with a Yoga retreat run by my good friend Caroline Wickham.  My job was to help out with some outdoor activities between yoga classes and scrummy food. First up was a morning run round most of the Island.

There's a variety of terrain in such a small island with the mostly flat north featuring common, sand dunes and the vast expanse of Shell Beach.  The there is the cliff path which is undulating and with a few sections of steps and then finally the inland paths.  And none of it on tarmac. I was nursing a recovering calf tear so a nice gentle run with a couple of ladies was a good rehab for me.

I shot a bit of video - hope you like it.


Next up was a exploration of the island via Geocaches.  If you've not heard of Geocaching then it is basically a treasure hunt by GPS.  There's a stack of them on the island so we had a good walk around looking for them.  We found all bar one which we were looking for. 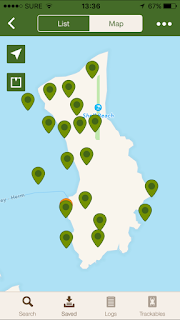 Herm is very photogenic - even on a less than perfect day I October - I took a few snaps and posted them to my flickr - take a look here.

With morning and evening yoga sessions from Friday night through to Sunday lunchtime, some great food and company it proved to be a very enjoyable weekend.  Caroline's retreats get fully booked so expect next year's to be popular too.  Check out her website - the next Herm ones will be th elast 2 weekends in October 2016.

Here's the five things I want to do in 2015 to help me towards my season goal of racing the best I can for Team Guernsey at The Island Games in Jersey. 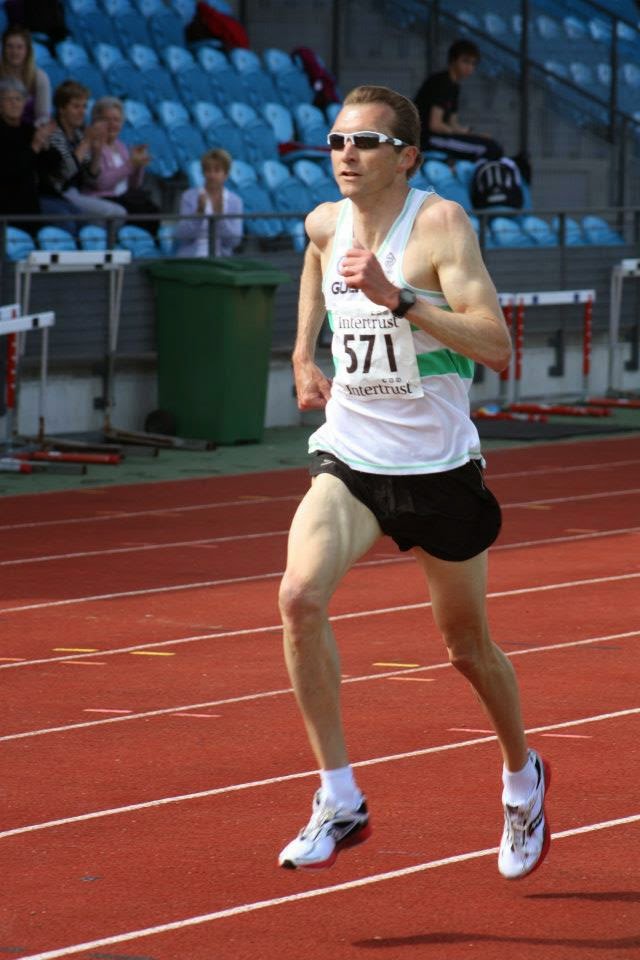